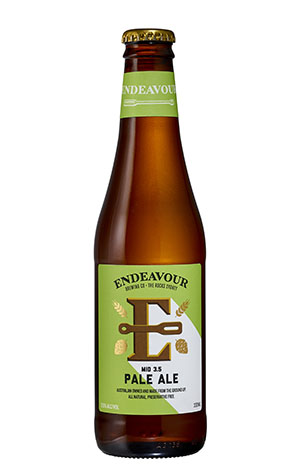 Within the ever expanding boundaries attempting to contain the craft beer world, there seems to be relatively little attention paid to traditional hop and malt focused beers hovering around the 3.5 percent ABV range. You might place blame for that on the inherently simple flavour profile which is something of an antithesis to what the modern craft beer movement has been about: namely, the pursuit of more flavour. And yet, a low alcohol middie holds an important place – especially for anyone wishing to have a couple of beers and still get work done or operate heavy machinery afterwards – and for that the style always has a dedicated cache of drinkers.

Endeavour’s Harvest Mid is for precisely those people, a super pale beer based on a simple super malt bill and a sprinkle of Vic Secret and Ella hops. While you’ll find the Harvest Mid out and about in bottles, the stuff pouring at the Tap Rooms is made on site. And if you're drinking it there, don't be surprised if there's some variation as brewer John sometimes gives it the odd extra dose of Galaxy dry hopping to give it a bit more zip.