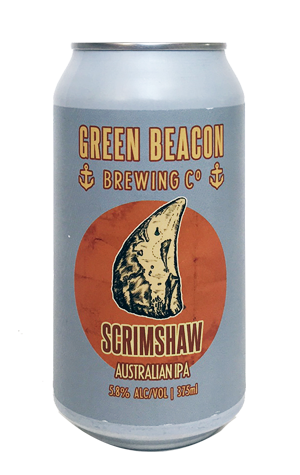 Scrimshaw has been the name of Green Beacon's summer seasonal for a few years now, named after the teeth of harvested whales into which sailors would engrave intricate designs back when whales were still hunted in the 50s and early 60s. It's a pretty brutal source of inspiration for a beer that packs a punch, but is altogether far more pleasant than the stories that inspired it.

As in past years, this year's – the first to be canned – is an Australian IPA that layers heaps of Aussie hops atop a pale backbone. It's a sweet and fruity affair, with pineapple and passionfruit aromas dominating from the off, backed up by a sherbet like sweetness, flavours of freshly squeezed oranges and sweet melon, all wrapped up with a zesty bitterness. It's another cracker from the Brisbane brewery that can seem to do no wrong on the beer front right now.

You can watch a short video of the team making it here too.

And other good beer outlets in QLD, VIC, WA & SA