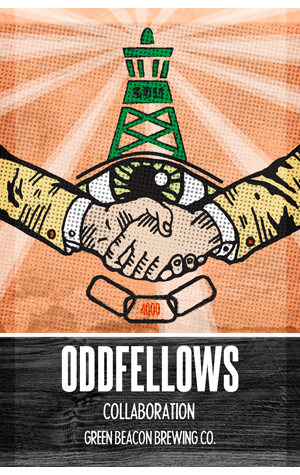 If you've known Brisbane then and now, you may well be aware of the transformation of Caxton Street, the strip of venues that was once the preserve of big brand mid-strengths but has since become one of the more colourful collection of crafty venues you'll find in the city. It's a transformation worth celebrating and that's what Green Beacon has decided to do, bringing together a few of the street's venues in the creation of a new beer.

The beer is named after the Independent Order of Oddfellows who used to occupy Baroona Hall back in the 19th century. It was an organisation that operated under the motto of friendship, love and truth and was also known for its rituals, secret practices and secret symbols. Today, the IOOF's former home is occupied by Lefty's Old Time Music Hall, the late night venue complete with bra-draped mounted animals, chandeliers, scarlet velvet drapes, live music and a colourful history that encompasses more than just good intentioned fellows.

Joining Lefty's and Green Beacon in the modern Oddfellows collaboration are Seymours Cocktails & Oysters, Enzo & Sons and Hope & Anchor, all of whom now pour a beer the brewery team tells us comes with a "juicy tropical flavour, hazy appearance and notes of lemon, pineapple and stone fruit."