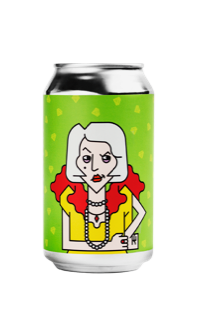 It's fair to say the rise of the New England IPA style has been little short of meteoric. Yet, of the very many variants that have been sent into the world by Aussie brewers, there's not too many that have become staples for said brewers. Thankfully, for lovers of hazy juice bombs, CoConspirators is one of the few that keeps on brewing theirs; better still, she's one of the best around.

Indeed, The Matriarch, for it is she that is the foursome's NEIPA, has enjoyed its own meteoric rise, pushing the gypsy operation comfortably inside the top 50 of the GABS Hottest 100 Aussie Craft Beers of 2017.

Much like Jackie Weaver’s hypnotic performance in Animal Kingdom, The Matriarch serves up its own complex web. But instead of lies and deceit, its focus is on flavour and steers well clear of any ingrained dysfunction. The result is a cloudy, dense beer that pumps out fruity, juicy citrus, pineapple and stone fruit plus a hint of pine that connects it with such beers' West Coast IPA forebears, while the distinctive, though subtle, yeast characteristics help confirm The Matriarch as an entirely different beast.