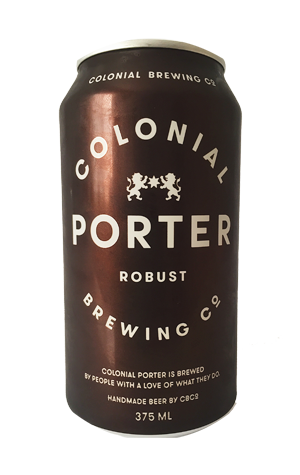 Porter. Noun. A person employed to carry luggage and other loads, especially in a railway station, airport, hotel or market.

This eponymous beer style evolved from the dockside strongmen’s favoured dark quencher in 1700s London, becoming, at one period during the following century, the most consumed beer style in the world. These days, with pale lagers holding that mantle by some considerable margin, this most malt focused of beers has become more of a respected classic, one pulled from the lesser thumbed pages of brewers' recipe books as the mercury tumbles. Its ephemeral natured is echoed at Colonial, whose Porter has moved in and out of the core range over the past six years and now returns as a winter 2018 seasonal.

When speaking of the beer’s return, Port Melbourne head brewer Ash Hazell took to social media to say: “There's no fruit, haze, acid or gimmicks... Just straight up classic robust porter loaded with chocolatey malt hints of tobaccoey hops”. On tasting, that’s a hard statement to argue with although, anyone looking for more defined descriptors might find chocolate fudge, baker’s cocoa and a little coffee evident under its dark crema head, all countered by a dry, bitter finish.

It’s moreishness may be matched by its potential to stoke fireside conversations among beer geeks about the distinction between porters and the stouts that evolved as something of an offshoot, the sort of debate that kept the dockside workers of yesteryear Port Melbourne up at night, no doubt.