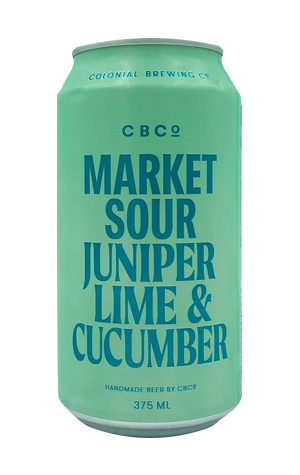 While others may have been slightly ahead in bringing such beers to their core range, with Boatrocker's Miss Pinky the first to hit major retailers, Colonial’s South West Sour is probably Australia’s most widely available sour. Launched in February 2018, the success of the peachy-coloured can now sees the brewery debut the Market Sour series, a bi-annual riff which will focus on fresh local produce.

Straight from the fridge, the cucumber aroma is most evident [Not sure I recall a beer with such a potent cucumber aroma in my life – Editor] with the gin-mimicking juniper and coriander seed becoming more pronounced as it warms. Fresh lime joins the fun in the glass for what's a more acidic drop than first expected, and one which resolves semi-dry yet with an intriguing, lengthy, botanical dryness.

Leaving lingering questions about boilermaker potential aside, what this release says about the development of the Australian beer market is remarkable. Only a few short years ago, a release like this would have been considered only viable for GABS and yet, in 2020, a sour beer with cucumber in a printed, pastel mint, printed tinny will likely be devoured with gusto – amazing!

Available from both breweries (check for changing takeaway guidelines before heading in) and independent CBCo stockists nationally.