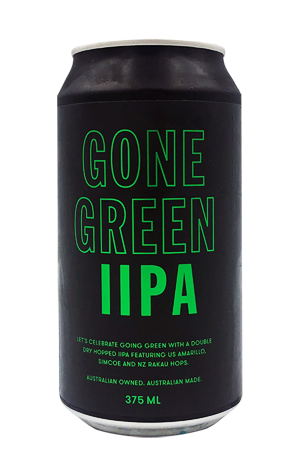 To celebrate the installation of 100kW of solar power on the roof of their Port Melbourne brewery (which, having dropped in for the first time since lockdown 1.0 last week, is becoming exceedingly full of brewing and packaging gear that needs powering), Colonial challenged their team to an in-house brew-off. The winning beer would be scaled up and released in honour of going green.

The beer that came out on top is appropriate for such a moment too: Gone Green has been given the heaviest hop dose of any Colonial beer to date, making it rather heavy on the green itself. Technically, the beer is a double dry-hopped imperial IPA, with the chosen varieties a trio of the lesser-seen NZ Rakau plus US Amarillo and Simcoe.

In character, Gone Green is only faintly hazy, but that’s not the point here: it’s all about the late hops. Vienna malt aids its golden glow, and presumably is also there to add a little more sweetness to hold the hops in place, allowing them to contribute sweet, faintly spicy, pine-meets-citrus-rind aromas. The 8 percent-plus booze content pokes its nose through amid the beer's drying, resinous earthy hop flavours in a beer that's big in character, big in booze, low(ish) in bitterness, and with hop character to spare.

And other retailers here