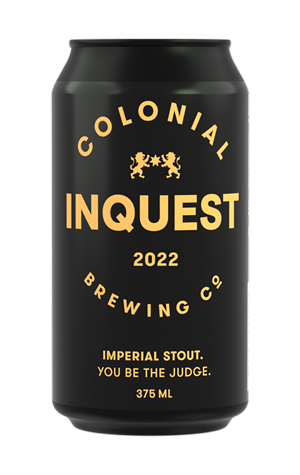 Colonial’s annual double digit ABV, midwinter explorations could retrospectively be seen as a sort of globally-inspired dark beer passport, charting both the imperial strength and empire-like reach of the substantial stout. What began with a straight-ahead English style imperial stout has morphed in subsequent years, turning up as both Belgian and heavily Centennial hop-imbued American versions over time.

Inquest 2022's entry looks to the north of the beer's origins, turning up as the Scottish edition. As with previous iterations, there’s a complex malt bill – nine feature here, including peated malt in a hat tip to Islay whisky. This delivers a signature earthy smoke on the nose, which continues through the silky palate arc – one that’s lighter than the brooding glass suggests.

Bitterness remains moderate amongst liquorice, molasses and pan-chocolate notes, and there’s a touch of Wee Heavy-like sweetness to complete the characterisation. All of which is begging for a bleak forecast, an open fire and a whisky boilermaker pairing.