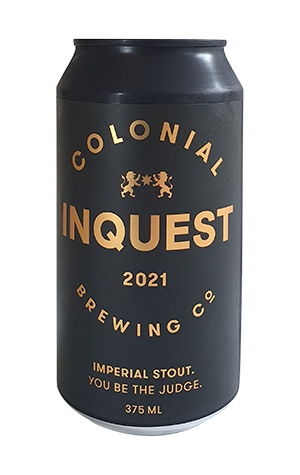 In these uncertain times, it’s good to have a beer release you can set your watch to. Colonial’s Inquest has become a release along those lines, with the American Imperial Stout being brewed for in winter every year since 2017 and at the time, it was the biggest beer in Australia released in cans. It's been joined by many other big tins since and though the recipe and approach changes each year, it does remain a highly awaited release from the brewery which is based in both WA and Victoria. This year’s was brewed in Margaret River over Melbourne, weighs in at 10 percent ABV, includes ten different hops, hops from America (Mosaic) and the UK (Goldings) and its own range of merchandise, made with Melbourne-based clothing company, Billy Bones Club.

Those ten malts might lead to a rich mix of stout flavours, including coffee, molasses, dark chocolate and roasted pecans but it’s the hops that help Inquest stand out from many of its contemporaries. From the first taste, there comes a substantial hit of berry, sitting somewhere between blackberry and loganberry, plus a softly earthy and spicey touch which is joined by notes of dark fruit. While the level of alcohol is something you do pick up on, it has the impact of adding to the beer’s richness rather than any boozy heat.