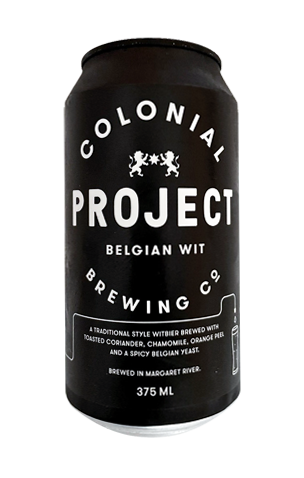 Colonial’s Tap Room Project beers, brewed at their original Margaret River brewery, have an underlying theme: classic styles tweaked with new world thinking and inspiration. Here they've set about creating a Belgian Wit that plays to this theme by featuring a dose of chamomile alongside the tried and traditional toasted coriander and orange zest additions.

An ester-driven, spicy yeast strain is prominent against a light, slightly cloudy base beer while coriander and citrus notes also feature. Malt character is light but certainly not absent with a gentle sweetness and some light bready and biscuity notes present too, and the 5 percent ABV bolstering this lighter style.

The WA wing of Colonial's Project series has been producing limited release beers of interest outside of the brewery's ever-reliable core range, with Belgian Wit proving to be another fine example.