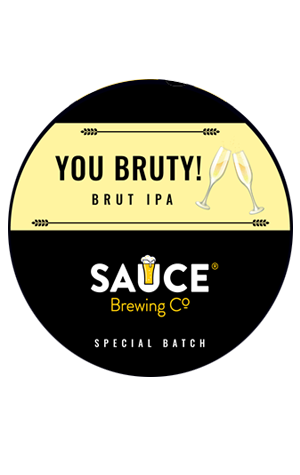 Considering the appetite their customers have shown for the “haze craze”, which has prompted the brewery to unfurl an ever expanding range of New England IPAs, it perhaps ought not to be surprising to learn that Sauce is one of the first breweries in Sydney to jump onto the latest trend to afflict the beer world.

Their Brut IPA, nicely channelling a catchy colloquialism, is called You Bruty! and it’s been launched in conjunction with their near neighbours at good beer bar Uncle Hops. That’s quite fitting really, because this is a very hoppy beer thanks to the brewers having hurled loads of Mosaic and Denali varieties at it during the dry hopping stage. While the beer is by nature also lean and dry – not to mention possessing a Champagne-like clarity – you’d be hard pressed to say it’s “bone dry” in the way whatever passes for a guideline for the style might suggest it should. Yet that doesn’t detract from the general aim and appeal of the beer as it conjures up a sort of slick hop oil sensation that seems to accentuate the generous fruity flavours – flavours that benefit further and seem fuller owing to the lack of bitterness.

Given the newness of Brut IPAs in general and the absence of local comparisons it's hard to say exactly where You Bruty! truly sits as an example on the spectrum of the style. But, based on the available evidence, it’s easy to understand the appeal and very easy to imagine we’ll be seeing a lot more of these.