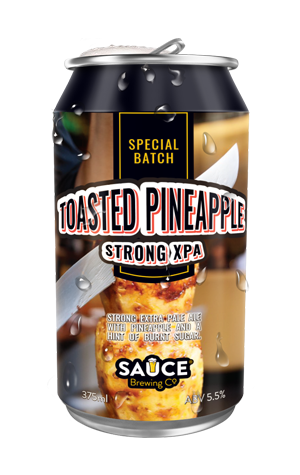 If you’ve ever been to a Brazilian BBQ (churrascaria) there is a 100 percent chance you’ve enjoyed some caramelised rotisserie pineapple. It’s a dessert so tasty that if a New Zealander invented it we’d probably claim it for ourselves. Now Sauce have married these sickly sweet caramel flavours with an XPA, and not just any XPA: a strong XPA.

Before I even have a chance to look at the colour, the sweet scent of candied pineapple jumps out of the glass and starts eating farofa in my nostrils (I poured it at arm's length too). A closer sniff reveals some burnt sugar mixed with the nostalgia of pineapple lollies. The head is white and thick and the colour is the dull gold of your grandpa's wedding ring.

The first sip is honestly perplexing. The extra alcohol is immediately evident while the toasted pineapple that hit your nostrils earlier is just relaxing in your mouth, like a mate keen for kickons who then just chills on a bean bag watching late night shopping. After multiple sips, the pineapple is unmissable, teaming up with the caramelised sugar to give one the feeling of eating too many pineapple lollies but without the abdominal pain. There’s a bit of smoke hiding in there for added complexity but mostly this is a fruity beer that will satisfy people who pick the pineapples out of the retro mix first.

A lot of breweries might wait until GABS to produce something like this, but for Sauce every day is GABS – or at least a celebration worth of some grilled pineapple.