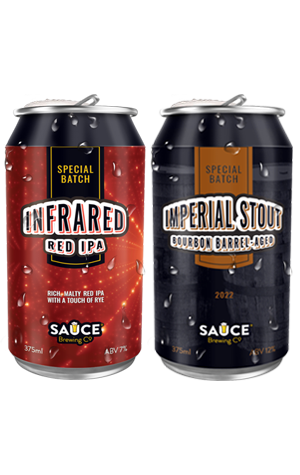 As the old saying goes, as the days get shorter the beers get darker (OK, I just made it up). I am a certified lover of summer but always look forward to winter brews with roasted malts and palate-blanketing ABVs. Luckily for me, Sauce have released two such brews designed to do the job.

Infrared Red IPA pours so dark it could almost pass as a porter. A glimpse under the light reveals a dark and mature red cordial colour with a delightfully sweet caramel and biscuit scent. Impressive from the first sip, there is a little bit of creaminess you might expect from a red ale that plays with a demanding duality of El Dorado and Mosaic hops. Malt and rye are also bringing a lot to the party with some gentle spice that both numbs and revives the palate. An ideal choice for a digestif after a warming winter feast, Infrared Red IPA balances a punchy ABV with a moreish malt sweetness.

Kicking off my first beer of the soon-to-be heritage-listed barrel-aged imperial stout season is one of three barrel-aged variants from Sauce this winter. Imperial Stout Bourbon Barrel-Aged pours an impenetrable darkness that you may associate with nighttime, outer space, and Batman’s capes. A sniff test reveals a potent, almost soy milk (specifically chocolate Up & Go) cocoa aroma. While sipping, first thoughts include: “Oooh yeah” and “That’s the stuff.” With an aggressive tang, Imperial Stout Bourbon Barrel-Aged flicks a viewfinder of flavours across your tongue with some intense dark chocolate bitterness upfront and rude and brown bourbon shots on the sides. In fact, the bourbon barrel-ageing (which took place over 12 months) provides such a spirited kick that I would both recommend this to bourbon lovers and not recommend it to those who had too many big nights on the stuff during uni.

Strong enough to match with a big, earthy cigar or a grand Sherlock Holmes pipe full of, oh, let’s say tobacco, Imperial Stout Bourbon Barrel-Aged 2021 could be enjoyed by the fire, but will bring the fire to you regardless.