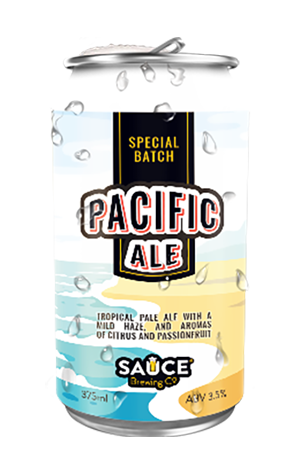 As a brewery known for doing weird stuff (even by Marrickville standards), when I opened this delivery from Sauce I expected to be on the receiving end of some sort of prank. Inside I found a no-nonsense Pacific Ale, a far cry from the DDH IIPA ACAB brews that make up their usual special batches. But hey, it’s hot and I’m thirsty!

Pacific Ale pours cloudy, the colour of caramelised pineapple flesh, with a nice foamy head that can’t quite say goodbye. The aroma is an absolute knockout, an intoxicating mix of passionfruit, citrus, summer and all the good things in adverts. It both looks and smells like a beer twice its 3.5 percent ABV.

These potent scents form a pleasant top taste that fist bumps your tongue before ducking off for a surf. There is a refreshing, almost cleansing, quality to Pacific Ale that makes each gulp a joy, largely due to the lower alcohol content. The hops get the last laugh, though, with a little giggle of Galaxy and Eclipse settling in your cheeks and gums.

In time for summer, Sauce have released a beer that balances flavour and refreshment so well it will make the most stringent, uptight, jeans-at-the-beach craft beer drinker request one in a stubby holder.