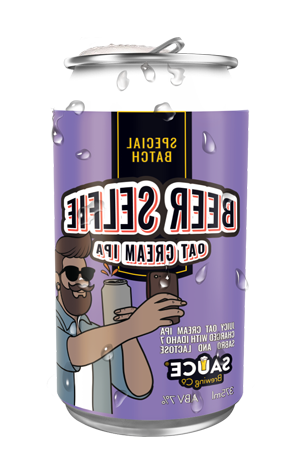 When I first got sent the can art for this beer I thought some silly bugger at Sauce had messed up and put the graphics the wrong way (to be fair, the Sauce graphic designer does have to design a lot of limited release cans). Turns out it’s deliberately backwards so when you take a selfie with it (or hold it up to a mirror) it will face the right way. Turns out this amazing tin also has beer in it, so let’s go!

Pouring the cloudy colour of preserved lemons, with a head that really sticks to the glass and an aroma of pine and grapefruit, the first sip is an absolute bounty of flavours that treat your tongue like a doormat on a rainy day. There is an upfront creamy sweetness, courtesy of the oats and lactose, which gives way to an almost earthy array of citrus rinds. Lingering is almost a little peppery-like kick but that may just be the 7 percent ABV, which is neither dominant nor concealed.

I could see myself drinking this with the cheesiest, oiliest, most overstuffed American pizza ever made and absolutely loving it. That might not be a moment I care to commemorate with a selfie though...