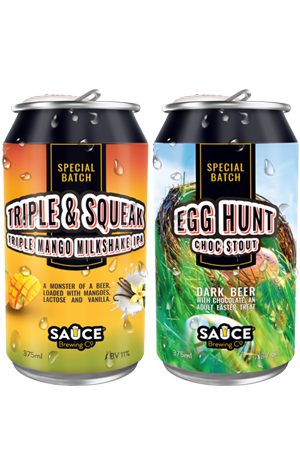 There are three certainties in life: death, taxes and Sauce releasing a new take on an overtly hopped favourite. After a successful run last year, Tr!ple & Squeak is back, a juicy IIPA dry-hopped with Citra, Idaho 7 and Sabro and finished off with real Aussie mangoes.

Pouring with a thick, lingering head, this 9 percent ABV imperial looks the colour of a fresh cut mango and smells like one that just got dropped in a fresh bag of hops. Rarely does a beer seem to park itself on your tongue like Tr!pble & Squeak does. All the fun you had smelling the mango aromas is replaced with a dense hop intensity that hangs around for an afterparty in your throat. It draws the moisture from your mouth like Himalayan pink salt, leaving every trace of its balanced and fruity profile behind like the world’s most arrogant criminal. I’m calling it now, this is the tastiest way to get the taste of garlic out of your mouth. Good for lovers of juicy beers that don’t skip on the hops and people who just had a horrible day at work.

Now that I’ve scoured my tongue, it’s on to something more festive: Egg Hunt Choc Stout, which promises to be "an adult Easter treat". Pouring with a cola like head and shimmer, it's like a dark lager to look at but with an unmistakably cocoa aroma that fills the nostrils.

Before the beer has even touched your lips the Easter chocolate flavours are in your mouth evoking the way in which chocolate eggs taste different to regular choc due to a greater surface area that allows more oxygen in [If this is indeed true, Benny, then count me as an old dog learning a new trick – Editor]. That insistent espresso flavour found in many drier, roastier stouts is nowhere to be seen here with chocolate instead the star. It's a form of chocolate which I may point out doesn’t conjure thoughts of bitter dark chocolate but rather of sugary choccy eggs full of the sort of fun you have when you get four whole days off work.