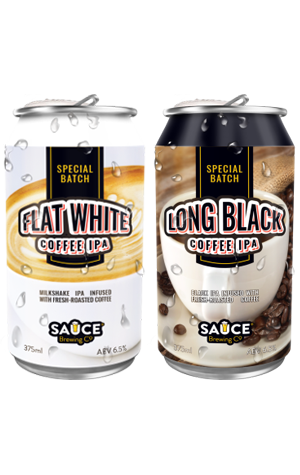 According to Sauce Brewing Co, in addition to being beer nerds they're also coffee nerds to the point they buy their own green coffee beans and roast them in-house. As brewers are wont to do, a member of the Sauce team eventually pointed at their house-roasted coffee and said: "What would a beer be like if we added that?"

After learning from an initial small batch, Sauce have released two West Coast IPAs, each clocking in at 6.5 percent ABV. Long Black Coffee IPA features coffee beans from Brazil, Colombia and Peru as well as some light roast malt additions, while milk coffee lovers will be drawn to the Flat White Coffee IPA, brewed in a creamy milkshake IPA style with oats, wheat and lactose as well as beans sourced from Ethiopia, Uganda and Sulawesi.

I started with the Flat White Coffee IPA. Crack it open and the unmistakable smell of the world’s favourite roasted bean smacks you in the nostrils like you’re waiting in line for your morning hit of survival juice. There’s just a hint of brown sugar and, you know what gosh darn it, I reckon I can smell some steamed milk! Poured into a glass it resembles a witbier with a mild, straw-coloured gradient. A bitter espresso taste flashes upfront, hanging around as you savour some creamier, throat-tickling notes. Continued sipping deepens the coffee effect this beer achieves effortlessly: bitter coffee flavour seems to set into your teeth, almost convincing you that you might need to brush your teeth or chew some gum to prevent any discolouring of your chompers.

In short, coffee is the undeniable star of a beer that does well to live up to the title of a Flat White IPA, sampled before moving onto the second beer in the Sauce coffee extravaganza; and everyone knows the long black gets the final say in what you will taste all day.

Long Black Coffee IPA settles in the glass almost looking like a nitro stout with a dark chocolate colour and a foamy head (or crema in barista terms). Aroma wise Sauce’s pet hops Citra and Idaho 7 come out to play with those house-roasted coffee beans. The first sip pinches your tongue with the kind of coffee hit that makes you wonder if you’ll have any chance of sleeping tonight. Infamous long black strength is teaming up like the Justice League with these big-hitting hops to create an amazingly balanced beer that manages to taste like an IPA and long black at the same time! I am really into pairing beer with chocolate and this IPA would enjoy a long and happy life with dark chocolate so intense that it hurts (70 percent cocoa or more).

Both taste like the sort of one-off you might find in a canvent calendar. Whether you’re into milk coffee or black, you’re in for a hell of an IPA, even if you might have trouble getting shut-eye later...