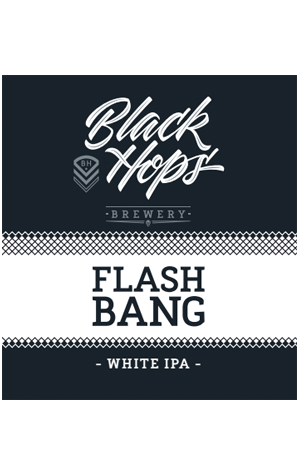 White IPAs are, more often than not, a cross between an American IPA and a Belgian witbier. As a style, they’re pretty young – the first one to appear is widely accepted to be the 2010 collaboration between the brewmasters of Deschutes Brewing (known for its hoppy beers) and Boulevard Brewing (known for its wheat beers). It wasn’t until 2015 that White IPA then made it into the BJCP style guidelines.

Unlike some other newer styles, white IPAs haven’t been popping up left, right and centre. So seeing a brewery adding one to their seasonal lineup is a pleasant surprise.

Flash Bang is Black Hops’ spring IPA, and it’s a richer golden colour than many other examples of the style. It fills the nose with the full gamut of hop aromas, from orange and grapefruit, through pine and resin to super ripe pawpaw. On the palate, the orange peel and spice from the witbier side of the family complements the citrusy hops well, before fading to a smooth, slightly dry finish.