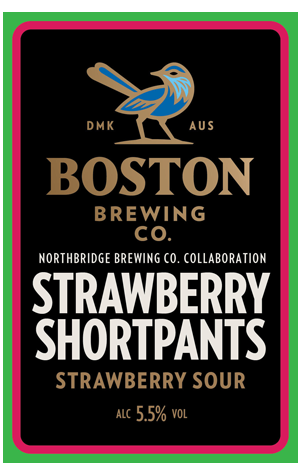 On arrival at the 2018 Fremantle BeerFest, I asked a knowledgeable brewer to name his standout beer from the first day – it’s hard to cover everything so sometimes it’s good to have some on the ground knowledge. Barely pausing for breath, the empathic reply was that I should immediately head to Boston Brewing’s stand to try the "beer of the festival" swiftly followed by the suggestion it should probably be enjoyed with a bowl of muesli. Curiosity piqued, similar feedback was garnered on the walk over and the queue to try Strawberry Shortpants represented further validation.

Now enjoying a wider release, the strawberry, vanilla and lactose-infused New World Sour was intended to evoke the classic cake, however the stream of nostalgic memories that flow from various drinkers on tasting is almost as fun as the beer itself. This is announced by a perfumed aroma of over-ripe strawberry, which carries through on the palate before being joined by an approachable lactic acidity. Fruit tannin dryness and restrained bitterness provide balance while a subtly integrated vanilla weaves throughout as those child memories start flooding in.