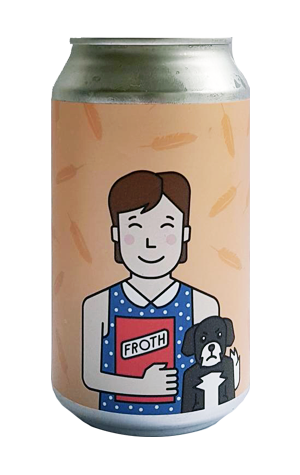 Brewed to celebrate the birthdays of CoConspirators and Froth Craft Beer Mag, the character depicted on The Editor is decidedly less of an underworld figure when compared with the brewing operation’s other releases. Instead, the artwork shows the magazine’s founder Emily Day, side-by-side with her canine accomplice Alfie.

The passionfruit and guava hoppy sour behind the label is a beer that quickly gained admiration upon release at the end of 2018, both from the bartenders and bottleshop staff responsible for selling it and the wider craft beer community. As a result, alongside another CoConspirator’s collaboration, The Berserker, The Editor sailed into our own list of Best New Victorian Beers Of 2018.

So, what is it about the beer that’s been impressing palates? Pouring an opaque yellow, it doesn’t take long after the beer hits the glass before you know you’re in for an array of fruity flavours. The passionfruit and guava notes manage to not only taste like the fruit is straight out of the blender but also mix with tropically-minded hops Galaxy, Mosaic and El Dorado for a rich and juicy medley. While there is a clear sourness to the beer, it’s more light tartness than lip-smacking assault, which means it’s the kind of sour that’s easy to return to again and again. It's a beer that's been brewed again and again too, quickly joining the other characters in the brewing company's core range.