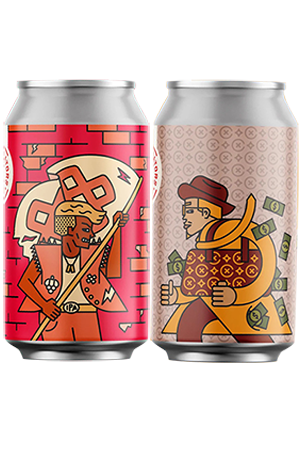 We don’t like to play favourites here at The Crafty Pint but when a brewery releases a West Coast IPA that features lyrics from one of your favourite songs, you can’t help but be impressed before you even open the can. That’s exactly what CoConspirators have done with The Renegade, with the beer's description copy paying homage to Afrika Bambaataa’s Renegades of Funk which you might better know for its inclusion on Rage Against The Machine’s seminal cover album, Renegades. While I could wax lyrical about that album for 1,000 words, you might be wondering how the beer tastes. Well, know that its combination of Simcoe, Mosaic and Citra hops bring a punchy mix of grapefruit, candied orange and tropical fruit, while the mix of malt has a touch of sweetness to pair against The Renegade’s firmly bitter stance.

Also fresh from the brewery is The Embezzler, a black IPA* brewed with CoConspirator's crowdfunding investors who chose the style and name as a celebration of the 50th beer from the Brunswick brewpub. It also features another all-American hop lineup in Simcoe, Centennial and Chinook for flavours of orange, pine, herbal and licorice that share the stage (or briefcase rather) with a rich mix of roasted, toasted and chocolate-oasted flavours.

*As an aside, black IPAs are very much back in style aren't they?