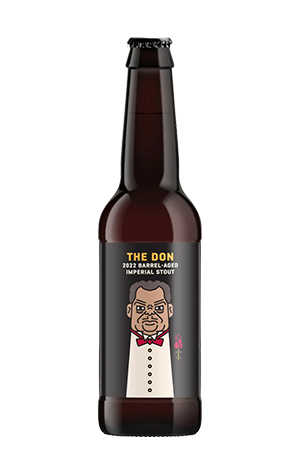 CoConspirators have revealed many underworld figures lurking beneath (or rather, on) their beers but maybe this whole time, there’s been a shadowy figure hiding just out of view. The Don has quietly been storing himself away in Starward barrels and now the whisky barrel-aged imperial stout is ready to be consumed and enjoyed.

Crack into the wax-dipped Don and you’ll find him to be incredibly luscious, smooth and velvety, as well as holding a complex web of dark and brooding flavours. There’s an intense mix of rich fruits with raisins and cherry all coming across like a well-aged Port or cherry, while a warming touch of whisky continually builds as the beer itself warms. The Don’s not one to go lightly either, with layers of coffee, chocolate and molasses all lingering on the palate well after he’s left the scene.

While The Don might be secretive, his arrival is not. The brewery is heralding his appearance with the mid-winter festival, Famiglia Affairs. It's taking place on July 30 at the CoConspirators brewpub and tickets are still available at the time of writing.