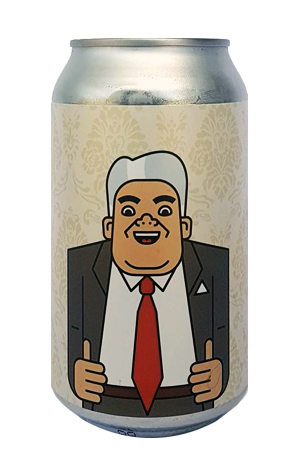 The Butcher, The Middleman and The Henchman might all be more obvious criminal underworld figures but anyone who’s ever finished bartering with their wallet far lighter than expected might feel there’s plenty of dubious salespeople out there too. And, for CoConspirators' first seasonal release of 2019, the brewing company has looked to that kind of peddler in decorating The Salesman XPA. Dressed in a cheap suit and surrounded by even cheaper wallpaper (one that’s reminiscent of a grandmother’s hallway in Keilor East) The Salesman also comes bearing Amarilla, Centennial and Citra hops (plus a nod to Franco Cozzo and, perhaps, to every murderous dictator's BFF, what with the oversized red tie and double thumbs up).

It’s a combination that brings flavours of citrus to the fore with pithy grapefruit the clearest of all, contributing to the beer's bitter backdrop. There’s a touch of sweetness in there too but the pale, malt body is otherwise lean and clean, allowing you to get from aroma to dry finish in no time at all.