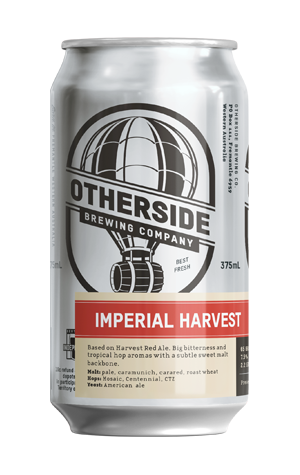 This Experimental Series release from Otherside is a big brother to the brewery’s popular Harvest Red, which itself started life as a limited release back in 2016. The beer quickly earned a second limited run before making itself an essential part of the brewery's core range.

Craft beer has long had a habit of taking something great and then making it bigger and bolder and it’s not always easy to achieve balance when the flavours and alcohol are given a significant adrenaline shot.

Thankfully, Imperial Harvest does an impressive job of building on the original, being both big and in balance. Caramunich and carared malt, along with some roast wheat, give the beer an attractive amber brown hue with a big off-white head. The bready and toasty malts support bold pineapple and stone fruit hop flavours and an equally bold and lingering bitterness.