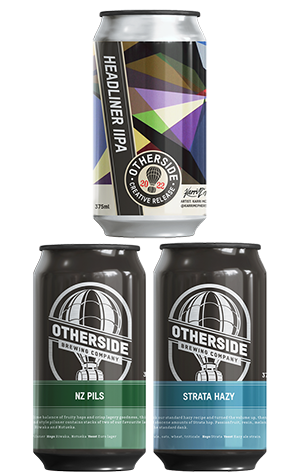 The problem with Otherside’s annual Headliner IIPA release is that I keep drinking it. Ordinarily, this would be of concern, however such commentary, or lack thereof, doesn’t provide much insight for readers of The Crafty Pint. That said, undocumented repetition hallmarks this latest version's drinkability and balance, one that's dabbed with orange oil essence and juicy flesh, a breath of passion-peach, a dank tease and moderate ABV for its imperial status.

And while Headliner may steal the show, fellow limited release NZ Pils is a very worthy upstart, bursting with its own swagger. Riwaka and Motueka’s Glimmer Twin citrus action emits as lime flower and grapefruit and noble hop grassy hints that sit atop a wildly crisp, clear pilsner base.

Meanwhile, Strata Hazy rounds out the liquid touring festival. Pouring plump, dense orange, and serving up its eponymous single hop passionfruit-meets-pot vibe, it also brings some papaya peel, not to mention a reasonably bitter undercurrent lurking beneath the fog.

And via stockists nationally in limited release