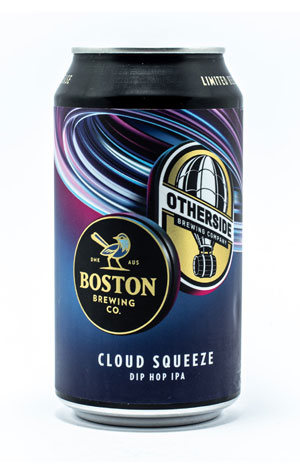 Otherside and Boston’s Cloud Squeeze Dip Hop IPA is a proper collab. Not only is the beer a product of two of WA’s finest craft breweries with a name that's a clever amalgamation of both outfit's popular and oft-hyped hazy-leaning IPAs, but it’s also the byproduct of a long friendship between Otherside’s Rhys Lopez and Boston’s Ben Bunker; both cut their brewing teeth at Gage Roads and now run their respective brewhouses.

The beer, however, isn’t just an excuse for a catchup between old pals, but a sound entry into the hazy IPA world that utilises the dip-hopping method. A cloudy, almost milky pour is striking while the white, lacy head is long-lasting and the aromatics mouth-watering, featuring pineapple and sweet citrus – mandarin, navel orange and white grapefruit – as well as a prominent but not overbearing coconut note thanks to Sabro hops.

The grist is simple – Maris Otter, triticale and oats – yet yields a medium-full body and lasting, soft mouthfeel. Devoid of lactose or an excess of residual sugar, Cloud Squeeze is balanced, while also not lacking in tacky hoppy bitterness, and is full to the brim with clean, punchy hop character.

This collab has roots that flow deep into the WA beer scene thanks to a flourishing beery relationship, and its quality is testament to what WA brewers are currently achieving.