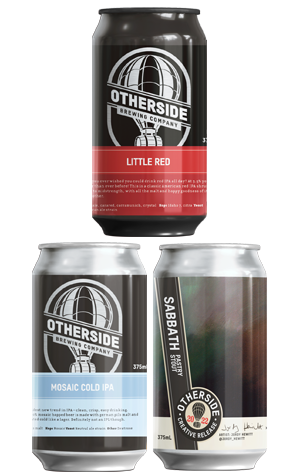 Given they launched with a red ale based upon head brewer Rhys Lopez’s homebrewing experiences, Otherside have always had a soft spot for such beers. Indeed, the amplified Redliner Red IIPA is one of his favourite beers, and featured in our Best New WA Beers roundup last year. So, while everyone else is going big, hazy and pastry – don’t worry, Otherside are too if you keep reading – it’s almost nostalgic to see the arrival of something in the mid-strength red realm.

Little Red is a mid-strength with personality too: gentle caramel malt aromas allure, with mandarin / tangerine citrus filled out by dried mango notes in the glass, and a sweet, piney resin. Otherside’s ongoing West Coast Juicy experimentation here contributes a juicy mid-palate before lasting dryness and an ongoing bold hop character take over in a very smart petite format.

Then there’s Mosaic Cold IPA, a single-hopped, on-trend beer which announces on the can that it’s not an IPL. It’s a notion which may be so for some in this frozen playground, but there’s definitely an approach that's more IPA here, albeit with a lager’s clarity. What’s more, you can feel the hop oils alongside peach candy, Moz-hop-dank [a turn of phrase Guy assures me is a familiar hop trope – Editor], and a firm dry / bitterness.

Which brings us to Sabbath 2022, Otherside’s annual, autumnal pastry stout. To date, the brewing brief has birthed hazelnut, coffee and imperial versions, but this year welcomes the most adjunct-laden offering yet: imagine choc-drizzled salted caramels dunked in coffee and you’re in the liquid ball park.

However, in spite of these indulgent additions, Sabbath ‘22 remains mature. This ain’t no vapid, grain-based, milk sugared confection. No, there’s a beer under here which may come as a surprise to some, and likely a relief for others, as sweetness quickly flips dry, and with some persistence too.

All available from the brewery and Otherside stockists in limited release