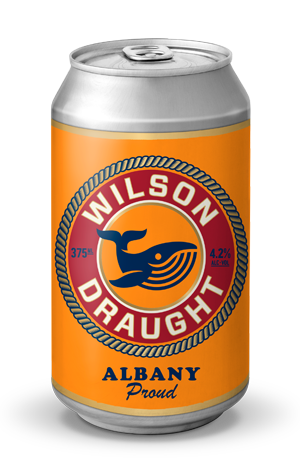 From the day they launched their first beers, the team at Wilson have made it clear they're to brew beer for the people – especially the people within the community of Albany in WA's South West. While their beers are now increasingly available across WA, their packaging boldly states "Albany Proud" and their range regularly pays homage to the coastal town they call home.

Wilson Draught comes with a minimalist but striking can design that tells a simple story and the beer within follows suit: a clean and crisp Australian sparkling ale with a restrained hop character and an equally restrained 20 IBU of bitterness. Some caramel malt flavours and a mild, herbaceous hop character keep things interesting enough for a quick return sip, which is perfectly fine given the middle of the road 4.2 percent ABV.

This beer was brewed in commemoration of the Albany Whaling Station's closure in 1978, a closure had a lasting impact on the town. Three decades on, locals are in agreement the station's closure was a positive move; presumably, they feel the same way about the constant supply of freshly brewed and locally-owned beer.