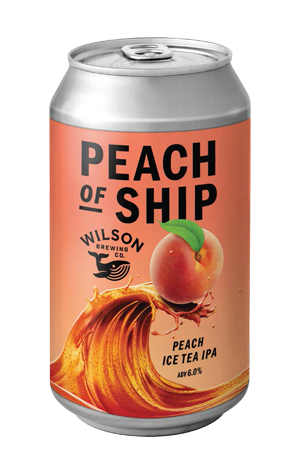 We’ve had pastry stouts and milkshake IPAs, Skittle sours and even a long mac topped up, boozed up and served in a can. As of late, there's been little off limits for brewers conjuring ways to recreate their favourite treats in the brewhouse, with many eager punters relishing the beer-soaked nostalgia.

Joining the party are Wilson Brewery, who have put forward their reincarnation of peach iced tea as an IPA. Loaded with 240 litres of Albany grown Snow White and Yellow peach juice, along with 20 kilos of fresh Earl Grey tea leaves, there’s little chance the likeness to the popular beverage will slip past drinkers. Brimming with rich, peachy sweetness and a familiar tea-like astringency, this playful release from the Albany brewers delivers on mimicry and overall drinkability.

Unfortunately, you won't be able to pick one up at your local deli on your lunch break, but cans have been appearing across WA since early August.