There's a fair few Australian breweries that have been around longer than Wilson Brewing that also take the name of their owner. Yet we're not sure we've come across one that is even close to being an extension of its owner quite like this Albany operation.

It was launched by Matty and Jessica Wilson in 2016 and it takes little time once you step through the courtyard at the front of the venue and into the glorified shed to realise this is a place built in his image. That's not to say he's the only employee – far from it, of which more later – but he gives his business more than a name, a reason to exist and its beer recipes; the brewery and all who work within it feel like an extension of his personality.

So it's just as well Matty possesses the sort of personality it's easy to fall for: an exuberant, grinning, seat-of-the-pants, red-headed, heartily bearded whirlwind of all-encompassing enthusiasm eager for you to love his beers, his venue, his staff (all of whom come bearing his grinning enthusiasm and, in many cases, similarly hearty beards), his hometown, his vision... well, you get the message.

For the first six months, the former FIFO boilermaker who sold the family home to follow his beer dream, brewed on what was effectively a scaled up homebrew kit he'd built himself – the biggest RIMS system going, he reckons – and looked to service a few local pubs. Now the beers are brewed on a far larger Spark brewhouse, one he admits he "retarded to make it more manual" and thus to his tastes.

"You get to see, touch and feel the beer at every point," he says.

You can see it too if you visit the brewery venue that inhabits a former plant nursery a short distance outside Albany; peer beyond the taps on the bar and you'll spy the small army beavering away in the brewshed to the rear. When The Crafty Pint visited, Matty was already employing ten staff despite the relative youth of the business and gives the impression that if he was able to give a job to everyone in Albany he would. Little surprise then that the man who handles Wilson's branding reckons he'll be mayor before too long.

Yet, while watering the local region is the key focus – hence a core range that plays things rather safer than many young breweries these days – Wilson has been receiving calls from further afield across WA, aided by successes such as winning People's Choice at the inaugural Perth Royal Beer Carnival in 2018.

And, while the core range keeps the reins tight, there's been plenty of experimentation elsewhere, sometimes involving barrels and frequently involving local produce; if you grow something in the Great Southern, chances are they'll be keen to brew with it. They've worked with a local indigenous leader on a beer celebrating native flora and have snapped up the fresh hop crop from Kracanup for the coming years too. And, in a bid to keep the beers on an upward trajectory, a brewer with commercial experience was added to the team to bring in new knowledge and allow Matty more time to focus on future planning.

And what does that look like? At time of writing, work was starting to significantly expand the venue while the target is to push the 15 hectolitre brewery to produce 15,000 litres of beer every week. There's half an eye on the export market and all manner of locally grown ingredients set to feature in beers too.

It's already been quite the journey for a brewery located in one of the most remote locations of any in Australia and, wherever it leads, you can be pretty sure you'll find a welcoming smile at its end. Wilson have shored up their core lineup ahead of summer 2021 with Shore Thing Summer Ale, a beer designed to encapsulate the Albany brewery's coastal surrounds within a light, refreshing and summery ale. A light body and bright pour take the lead in a beer that's particularly well suited for session sipping, while vibrant, citrus aromatics are abundant on the nose. Hops take centre stage but are purposefully gentle in character, with a very modest bitterness only just persisting after each sip.… Read more
Golden Yellow From the day they launched their first beers, the team at Wilson have made it clear they're to brew beer for the people – especially the people within the community of Albany in WA's South West. While their beers are now increasingly available across WA, their packaging boldly states "Albany Proud" and their range regularly pays homage to the coastal town they call home. Wilson Draught comes with a minimalist but striking can design that tells a simple story and the beer within follows… Read more
Golden Light House is Wilson's lower alcohol offering, presumably conceived with out of town visitors as well as those who need to make the drive back to Albany after dropping in. It's also a good introduction for what lies ahead in the Wilson range: malt led, soft on the palate and leaning towards the sweeter side of things. Ella hops were used to add the gentlest of bitterness and there's a late dry hop with Cascade but it's more about the bready, biscuity malts and a soft, almost fluffy texture.… Read more
Golden Yellow The next step along the Wilson core range from Light House for anyone working their way through the taps at the bar (or the cans in their mixed six) is the Figure Head. It's similarly light in colour but bigger in terms of booze content to the brewery's session ale, yet perceptibly lighter on the palate. There's hints of light citrus and apple on the nose, with the Aussie Ella hops delivering a gentle bitterness too. Malt wise, expect some light, cracker like flavours in another beer sat firmly in… Read more
Golden Yellow Another offering from Wilson that favours malt character over hops, albeit one that steps things up in taking inspiration from English style bitters and featuring Crystal malts that lend it its darker hue as well as toffee, caramel and sweet nutty flavours. There's a fruitiness at play from the English ale yeast in a beer that's reminiscent of a sweeter bitter from the UK and would likely fare well alongside a Ploughman's Platter.… Read more
Rich Brown The majority of the Wilson core range might lean towards putting maltiness to the fore but Rough Seas is where they serve up something for visitors seeking a hop driven experience. It's a pale ale with Aussie hops Topaz, Galaxy and Cascade taking centre stage in the shape of some lovely citrus fruit and floral aromas and flavours. There's still plenty of caramel malt in there contributing to its hazy, deep copper hue, but the beer still possesses the most noticeably dry finish of all the core range… Read more
Golden A highlight from The Crafty Pint's first visit to Wilson was this dark ale. And, given Matty Wilson's fondness for malt driven recipes, perhaps that should come as little surprise. A dark brown pour, it serves up plenty of chocolate and dark sugar characters with a touch of treacle in there too. For all that, it's pretty light on the palate, making for an easy-going sweet treat.… Read more
Dark Brown As part of its celebration of the Great Southern region of WA, the Wilson team has struck up a partnership with small (but growing) local hop grower Kracanup. It means they are able to get their hands on hop cones from some rare varieties, one of which, Flinders, goes into the sixth member of the brewery's core range. They lend the beer a juicy, fruity character, one that sits alongside caramel and nutty malts and helped Dirty Oar move quickly from a seasonal beer to the biggest offering in the year… Read more
Rich Brown 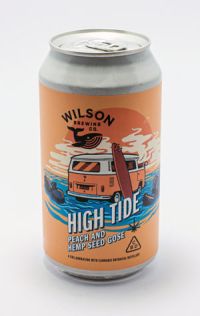 For Wilson Brewing’s latest trick, they partnered with Cannabis Botanical Distillery in the WA coastal town of Denmark to produce High Tide, a gose infused with peach and hemp seed. Ablaze with refreshing acidity, this light and fruity offering is predominantly peach forward, with a touch of underlying grassy, vegetal character from the addition of hemp seeds. A light body and perky carbonation bolster drinkability while the textbook sose saltiness is just present, superbly complementing the sweet,… Read more
Golden Yellow This Wilson Brewery seasonal was brewed as an ode to the Golden Zeepaert (AKA Golden Seahorse), allegedly the first ship to sight the part of the Australian coastline that would become their hometown of Albany in the early 17th century. If that doesn't mean much to you and you just want tasty craft beer, then this beer certainly still has relevance to you. Starting out with a traditional hefeweizen recipe, an abundance of locally grown Albany lemons were thrown into the mix, adding a ship load of… Read more
Golden Yellow The seemingly unstoppable Wilson Brewery have launched yet another mouth-watering fruited ale into 2019 in the shape of their hotly-anticipated Scurvy Nights Sour Cherry Dark Ale. Initially brewed as a clean malt-driven dark ale, the unfermented wort was spiked with lactobacillus, yielding a tonne of tart and a touch of funk. Post fermentation, the beer was finished off with a healthy dose of fresh cherries, grown in the brewery’s hometown of Albany. Refreshingly tart and pleasingly robust, Scurvy… Read more
Dark Brown We’ve had pastry stouts and milkshake IPAs, Skittle sours and even a long mac topped up, boozed up and served in a can. As of late, there's been little off limits for brewers conjuring ways to recreate their favourite treats in the brewhouse, with many eager punters relishing the beer-soaked nostalgia. Joining the party are Wilson Brewery, who have put forward their reincarnation of peach iced tea as an IPA. Loaded with 240 litres of Albany grown Snow White and Yellow peach juice, along with 20… Read more
Golden Wilson Brewing are getting pretty good at brewing beers to satisfy Albany locals. When Racewars, an Albany based drag-racing competition, approached the family-run brewery to brew a collaboration beer for the event's thirsty punters, the brewing team couldn't think of a reason not to, and so a 4.2 percent ABV summer ale was born. Loaded with Cascade, Ella and Galaxy hops, this light summer slammer has plenty of citrusy hop presence and just as much drinkability. If that sounds like your thing, race… Read more
Golden Yellow Serendipity strikes again for Matty Wilson. Whenever he mentions a new beer concept to his Albany hop grower, he’s encouraged to talk with the lady next door, Val. Not only does Val have a mini-orchard to drawn from but she also happens to have twenty 30-year old yuzu trees – not the kind of thing you’d normally expect to find in the Great Southern. Originally a wild hybrid citrus found in China, yuzu has become highly sought after in the brewing world for its complex sour mandarin–grapefruit-lime-like… Read more
Pale Yellow