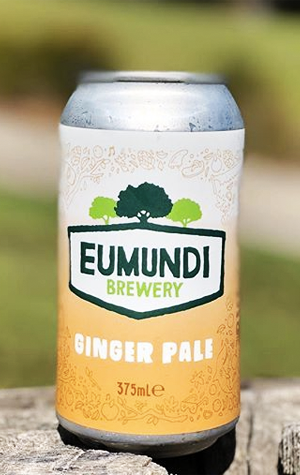 This is not a ginger beer. It’s a beer with ginger. That’s an important distinction.

This isn’t made with sugar and vodka and ginger essence/syrup/flavouring. It’s a pale ale brewed with water, malt, hops, and yeast… and ginger. While ginger beers are often sweet, sometimes to the point of being thick, sugary and cloying, this Ginger Pale Ale is dry and spicy and subtle.

It encapsulates what Eumundi wants to do with a number of their seasonals: to make interesting beers that incorporate fresh ingredients from local growers that showcase the flavours of the area. Future iterations may include honey, or macadamia nuts, or turmeric, or coconuts… but this one takes fresh ginger grown less than a kilometre from the brewery and puts it on display.

The brewers tried and tested and found that adding the right amount of ginger at the right point in the process wasn’t as easy as they originally thought. But their experimentation paid off – it’s not so prominent as to overwhelm, nor so understated as to make you wonder why they bothered. From the aroma through to the flavours, there’s a vibrant zing, a spiciness, a complexity that somehow satisfies and yet simultaneously sparks curiosity, forcing you to take another sip to explore the flavours further.

If you’re on the fence about ginger, this one might not be for you. But if ginger is your thing you can join the impassioned locals who cry for more, more, more, and just about start a riot whenever a keg runs out.