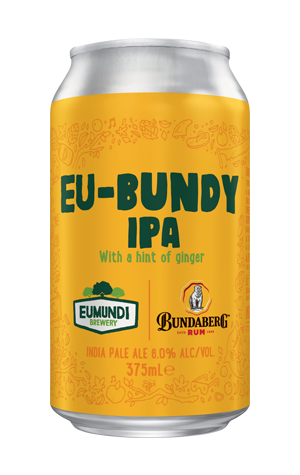 Eu-Bundy IPA, a collaboration between Eumundi Brewery and Bundaberg Rum, is a West Coast IPA made with Bundaberg’s Small Batch Spiced Rum and additions of ginger from both Bundaberg and Eumundi. Duncan Littler from the Bundaberg Rum Distillery says: “Finally, we can deliver a rum-influenced IPA to the beer lovers of Queensland!” - apparently something that those in the rum world have been looking to do for some time.

At a glance, it could be mistaken for a lager with its super bright, light gold appearance. But get a little closer and the complexities will wash over you. The rum brings a spicy, herbal, almost medicinal quality, like an aromatic hot toddy with cloves that your grandma makes when she’s got the sniffles. Add in a little sugariness and even slight banana notes, along with a rum-and-dry-ginger-ale character, and you've got yourself an IPA unlike any other.