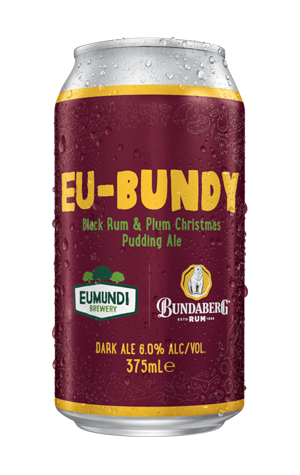 Today's fun fact: even at its origin, plum pudding never had plums in it. The word plums, in pre-Victorian England, referred to raisins.

Strangely, I got a nice raspberry character on the nose up front. It wasn't until I started sipping that the rummy notes started to hit me: sarsaparilla, cherry cola and dark fruits swirl together, with flavours that seem sweet but vanish in the bone dry finish. By this point, the leading aroma had switched to brown sugar and the raspberry notes had disappeared. It's a Christmas miracle.

Duncan Littler from Bundaberg Rum reckons one of the benefits of this beer is that "often it is simply too hot in Queensland to enjoy a good ol’ plum pudding on Christmas Day". I'd fight him on that premise – neither the amount nor the type of food on Christmas Day should be limited by anything so insignificant as oppressive humidity or delirium brought on by a 38 degree day. Nevertheless, the flavour profile of this beer makes it fitting for Christmas Day dessert; I'd just say drink it as well as a big bowl of pud', not in place of it.