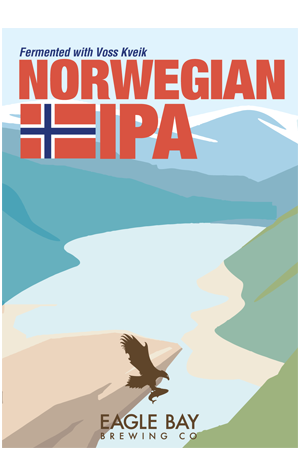 We've seen them all here at The Crafty Pint: from the pastry inspired, to the double dry-hopped and sour, from the tiny to the sextuple and everything in between, there's few places IPAs haven't been in recent years. And they've started down another path in recent months with the advent on these shores of kveik yeast.

Originating in Norway, it might bring a fresh face to the New World hoppy beer arena, but its history in brewing is lengthy, and it's collecting quite the fanbase. Eagle Bay seems a worthy contender to throw down a fruity, ester driven Kveik IPA given their knack for brewing styles with a bit of history as well as a reputation for trying something different with their more experimental Single Series releases.

So, meet the Norwegian Kveik IPA, abundantly hoppy and fermented with the Voss kveik yeast strain. It's been brewed with a selection of hops including Amarillo and Motueka, generously dosed into a crystal clear, light base beer that has a touch of Rye and Munich malt for complexity. The star of the show is clearly the yeast, however, which ties the malt and hops together with savoury touch, a hint of funk and some bold, citrusy esters. A generous and cleverly put together IPA that's as original as it is tasty.