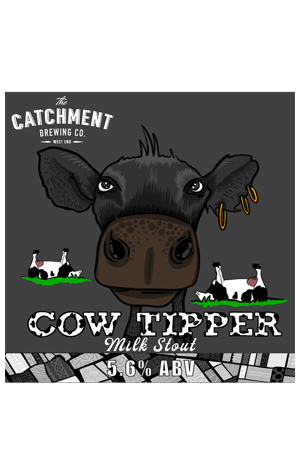 Let’s get this straight from the outset: cow tipping is not a real thing. Sorry to burst your bubble, but better you hear it from me than get into an argument about it in a bar and find yourself humiliated by an alarmingly large number of articles on Google. It’s an urban legend designed to prank people by getting them to attempt it. Cows rarely even allow themselves to be approached for a pat (yet I have tried numerous times and will continue to try every time I see one). They won’t let you rock up and give them the old heave-ho - even if you were somehow strong enough. Which you’re definitely not.

Cow Tipper Milk Stout, on the other hand? Immensely approachable and super easy to knock down. It began as a one-off at Catchment, but ended up returning to the taps frequently simply because of how many people complained when it disappeared.

The pillowy tan head hints at rich flavours within, and it doesn’t disappoint. One whiff and you’ll get a face full of chocolate milk, but when you dive in you’ll discover it doesn’t just blast you with sticky sweetness. There’s a hit of sweet chocolate, but sipping introduces dry roastiness, cocoa and coffee to accompany the original flavours. Vanilla was added during brewing, but if you didn’t know it was in there, you wouldn’t pick it - it’s not there to steal attention, but to open up the other flavours, and it does so with finesse.

Expect to see Cow Tipper often, and to see variations in the future - the Catchment regulars are always clamouring for more.