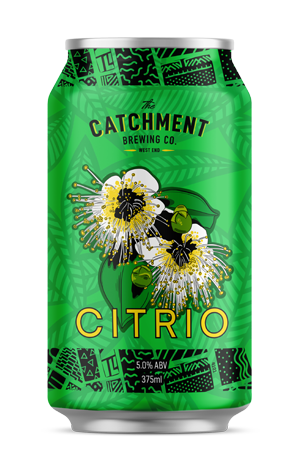 They've been wasting little time expanding their can lineup since debuting with the Pale Select and Whynot Lager, with Catchment Brewing adding Citrio to their offering as summer 2019 approaches. In doing so, they've created another approachable beer tailored to the warm local climate. Citrio is an American pale ale brewed with lemon myrtle leaf, an ingredient native to central and south-eastern Queensland. Not content with simply brewing with it, the beer's name comes from its scientific name, Backhousia citriodora, while lemon myrtle flowers adorn the can.

Pouring a lovely gold, you immediately pick up a pleasant, lively lemon aroma. On the tongue this is distinctly lemon myrtle, with that trademark tang and herbaceousness, plus a lemon and lime zestiness. There’s a touch of eucalyptus and camphor here as well, giving the beer a slightly salubrious and earthy quality to go along with its citrus characters. There’s a bit of the malt poking through, particularly as it warms, giving a dash of water cracker and a slight sweetness, which help carry the moderate bitterness that lingers a little at the finish.

It all makes for a refreshing, easy-going pale ale that will go down as enjoyably in the colder months as it will in the summer heat.