Since opening their doors in November 2015, the Catchment Brewing crew have been asking the question: what does it look like to be part of the eclectic, artistic and historic landscape that makes up West End?

With a deeply established arts scene and a blend of cultures, it’s a haven for non-mainstream lifestyles and has long been known as a suburb that celebrates diversity and creativity. As one of Brisbane’s oldest suburbs, and the site of one of Brisbane’s first breweries, it’s also an area drenched in history.

While the suburb is a patchwork of character and colour, it takes time to become part of the fabric - particularly on Boundary Street, the deeply lined but lively face of West End. (If anywhere is suited to mixed metaphors, it’s West End.) So Catchment Brewing have been patiently weaving themselves into the local fabric.

At a community level, that’s included turning to local artists to design decals for seasonal beers and inviting Brisbane performers to bring live music into the venue.

At a historical level, Catchment wants to continue the legacy of the long defunct West End Brewery, which prided itself on being “The People’s Brewery”. A newspaper article about West End Brewery in 1896 said that “a light, refreshing, and mildly stimulating beverage is the order of the day”, and Catchment’s approachable core range fits that description. The Whynot Lager, Pale Select, Hoogley Session Ale and Indies gold medal-winning Vulture IPA are all designed to be supremely drinkable, which makes them ideal for sessions spent gazing over Boundary Street as the afternoon sun fades.

It’s worth taking a moment here to note how rare it is to find a brewery on the high street in the inner city, as opposed to tucked away in an industrial area. Such a location gives Catchment a number of opportunities – and challenges.

The high foot traffic and proximity to the CBD means this isn’t a Thursday-to-Sunday-evening brewpub. Catchment opens from 6.30am for coffee, and offers lunch and dinner six days a week.

The constant and diverse buzz of passers-by creates a need for different spaces within the venue too – a capacity of 200 is spread across three spaces, so a day at Catchment doesn’t have to mean facing the crowds.

The front bar – or Boundary Bar, as it’s called – has the familiar feel of a thriving West End joint, with a couple of fermenters behind the bar reminding punters this is an operational brewery serving up freshly made beer. This is the area perfect for mingling and people-watching, and keeping one eye on the bar and kitchen as you ponder your next order.

If it’s the brewery experience you’ve come for, pass through to the back to find Brewery Lane, the indoor-outdoor space that feels like a hidden laneway. This is the source of the beer, the centre of fun, and the heart of Catchment. Here you’ll find a row of stainless steel tanks glinting with the reflection of party lights, hanging plants soaking up the thrum of live music, and a street art style wall mural. Very West End.

Upstairs is Hidden Windows, the heritage-rich secondary bar that works as a function space. A pleasant sense of seclusion makes it just right for gatherings of friends to corporate events to wedding receptions. With one exposed brick wall, one wall covered with barrel lids, and terraced balconies looking out over the streetscape – yes, and some hidden windows – this room lets you enjoy your own private piece of West End, past and present.

It’s evident Catchment has an overarching ethos of diversity and accessibility without compromising quality. You can see it in the food menu: a Butcher’s Plate, soft shell crab roll and wings by the kilo are there for the meat lovers, with plant-based options standing unashamedly beside them: roasted cauliflower with apple glaze as a snack, a towering double-patty vegan burger, and vegan aioli served with the fries and wedges.

When it comes to drinks, the beer obviously takes pride of place. But even here there are broad options. As well as the easy-drinking core range, there’s always a few seasonals pouring. Brewer Daniel Venema keeps things interesting: sometimes he explores traditional styles and pays careful attention to their historical origins; sometimes he innovates with weird and wacky ingredients, with past inventions including a lemon myrtle pale ale, a Lamington stout, a citrus salted IPA and a Scotch ale infused with Christmas puddings.

There’s a full bar offering wine, spirits and cocktails for those after something other than a pint. But a close look at the drinks menu will show beer has even snuck its way into some of the cocktails. And back on the food menu, it’s crept into the fish batter, and the sauces as well.

It’s hard to escape beer at Catchment. But with the hundred-year-legacy of West End Brewery in the air, and fresh beer bubbling away in the tanks… why would you want to?

Brisbane's West End (and the adjoining parts of the city) is awash with great beer venues these days. Heck, there are even breweries that call the 'burb home. So we made the area a focus of a Crafty Crawl – and have since updated it with even more goodness.

Daniel Venema is a bird photographer and beer lover who brews for two Brisbane brewing companies. We caught up with him to find out how his love of birds and brewing led him from homebrewing to his dual brewing role. Within the residential area of West End, there’s a road called Whynot Street. When you read the street sign, it takes all the restraint in the world not to pose the silly question: “Why not street?” It’s a question that’s as nonsensical as it is fun to ask. In the opinion of this writer, Whynot Lager makes a whole lot more sense. It’s a classic German style lager made with one malt and one hop, and bears all the simplicity and clarity you’d hope for. A clean stretch of citrus leads… Read more
Pale Yellow The West End Brewery of the late 1800s brewed a beer called the Pale Select, and nicknamed it “The King of Beers”. With this in mind, Catchment set out to recreate a beer worthy of the regal moniker. Their Pale Select is a hazy gold, flashing in the light like a ruler’s sceptre and crowned with an aromatic head. While it differs from the beer of yesteryear by being an American pale ale with all American hops, it matches that easy-drinking ale by playing down its bitterness. Gentle flavours… Read more
Golden 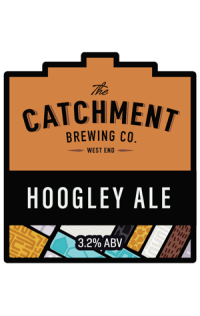 Hoogley may just seem like a funny word, but it’s actually the name of a convict ship, as well as a street in West End. And also a funny word. Hoogley Session Ale may seem like an Australian pale ale with its citrus and passionfruit notes, but it actually uses two classic American hop varieties, El Dorado and Citra. It may seem like a beer that packs a punch, with its fruity aromas bursting out of the glass and an equal blend hop and malt flavours filling the mouth, but it’s actually a low alcohol… Read more
Golden Yellow For many of us, hearing the name “Vulture Street” is a throwback to one of Powderfinger’s best albums. It’s more energetic than their previous albums, and it’s easy to sing along and feel the fun they must’ve had while recording it. (While Rockin’ Rocks is fine, feel free to skip straight to track two, On My Mind. You’re welcome.) As well as inspiring the name of the album, Vulture Street also inspired the name of Catchment’s Vulture IPA. This beer’s a throwback to a time when… Read more
Golden 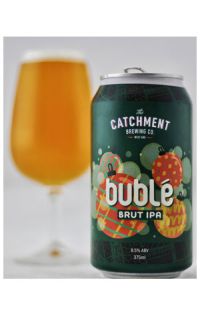 What do you think of when you think Christmas? Bubbly? Baubles? Michael Bublé singing Christmas songs on your nanna’s favourite Christmas CD? Well, Catchment have got you covered with Bublé, a seasonal release Brut IPA brewed especially with the southern hemisphere Christmas - and all three of the aforementioned Christmassy things - in mind. In a can adorned with baubles and Christmas colours, this Brut IPA was fermented on champagne yeast and used a metric Santa-load of Nelson Sauvin for its… Read more
Golden Yellow A lot of good things are named Juno, like the Ellen Page movie, the NASA mission to Jupiter, and now this beer. Drawing its name from the scientific name for yuzu, Citrus junos, Catchment’s Juno Yuzu Summer Ale was produced in collaboration with Chop Chop Chang’s, a pan-Asian restaurant serving up delicious plates across the street from Catchment’s West End home. The yuzu is a citrus fruit originating in China, introduced to both Japan and Korea during the Tang dynasty that has become a firm… Read more
Golden Yellow They've been wasting little time expanding their can lineup since debuting with the Pale Select and Whynot Lager, with Catchment Brewing adding Citrio to their offering as summer 2019 approaches. In doing so, they've created another approachable beer tailored to the warm local climate. Citrio is an American pale ale brewed with lemon myrtle leaf, an ingredient native to central and south-eastern Queensland. Not content with simply brewing with it, the beer's name comes from its scientific name, Backhousia… Read more
Golden Yellow Let’s get this straight from the outset: cow tipping is not a real thing. Sorry to burst your bubble, but better you hear it from me than get into an argument about it in a bar and find yourself humiliated by an alarmingly large number of articles on Google. It’s an urban legend designed to prank people by getting them to attempt it. Cows rarely even allow themselves to be approached for a pat (yet I have tried numerous times and will continue to try every time I see one). They won’t let you… Read more
Black Who here likes research? If you do, be a pal, and look into this for me: why do so many Aussie saisons sit around the 6 to 7 percent ABV mark, when the style was originally a low alcohol beer for farm workers? Of course, I could speculate, and I will. Perhaps Aussies already had a low alcohol style they were comfortable with (mid-strength lager), and so when Australian beer lovers started to discover French and Belgian beer styles, the standouts were the big, sticky beers - the more funk, the more… Read more
Golden Yellow