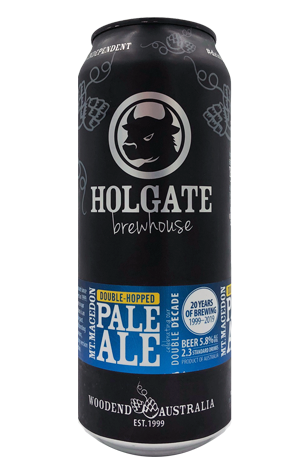 As names go, Double Decade Double-Hopped Mt Macedon Pale Ale doesn't exactly roll off the tongue, but does it travel better the other way? It's the fourth in the series of releases brewed by Holgate to mark their first 20 years in operation, following beefed up versions of their ESB, Stout and White Ale, and the one timed to be released as the double decade ticks over.

It's not double the size, weighing in at a strong pale ale-esque 5.8 percent ABV, and doesn't pack double the punch either. Instead, it appears to be more a case of enhancing the beer's flavour and aroma without impacting its sessionability and that, for the most part, means delivering more hoppiness. From within the faintly hazy copper liquid you'll likely pick up light, sherbety citrus, red berry and melon aromas, and even some Wrigley's Juicy Fruits gum character atop the gentle malt sweetness too.

Bitterness is restrained and it's pretty lightfooted and easy-drinking. So, yes, it does travel over your tongue better than it rolls off it.