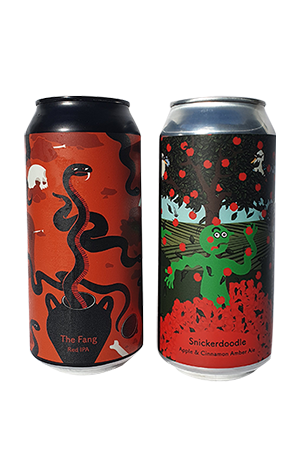 The cans keep coming apace from Tallboy & Moose with the Preston brewpub sending two very different malt heavy beers into the world at once. First up is The Fang, a red IPA brewed with RedBack and Shepherds Delight malts from New Zealand’s Gladfield Malt. Stick your fangs into it and you’ll be treated to a rich medley of raisin, redcurrant and prune swirling around the deeply red liquid. Then it’s the hops that do the talking with a mix of grapefruit and orange set against a pine-filled backdrop before hitting you with a big bitter finish that balances the slightly sweet malt body.

Next up is Snickerdoodle, an apple and cinnamon amber ale brewed as a collaboration with Western Australia’s Beerfarm. Made with some 300 litres of apple juice from Victoria’s Harcourt, the cinnamon and a light spice nudge the beer towards dry cider territory, while the underlying sweetness from the rich amber body twists it in the direction of dessert beers. Speaking of dessert, it also stirred flashes of showbags full of Big Red Gum and banana lollies.