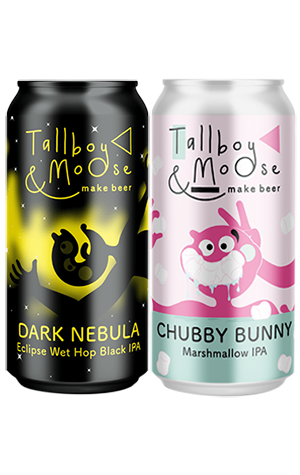 Whether it's the downtime provided by Easter or the many beers brought by the hop harvest that make this time of year matter to you, Tallboy & Moose might well have you covered. Dark Nebula was brewed with Tallboy’s neighbours and close confidants, Carwyn Cellars, with the collaborators securing fresh Eclipse hops from the High Country and getting those flowers into the Black IPA the same day they were picked. The autumnal release provides quite a hit of coffee that's soon joined by dark chocolate, roasted malt and orange, which when all wrapped together brings to mind a block of Lindt chocolate. While there's also zesty mandarin, Dark Nebula isn't just about that citrus, with the fresh Eclipse also providing resinous pine and green grape.

If dark chocolate doesn’t satisfy you and you want something a bit sweeter, Chubby Bunny might be your chosen beer to share with a few Easter eggs. The oat cream IPA was made with marshmallows thrown in along with marshmallow root powder and as something of an aside, I feel like the longer I’ve written about beer, the less often I’ve needed to Google if an ingredient is real but “marshmallow root powder” certainly sent me there, mostly because I didn’t know you could grow marshmallows in the ground. I'm not sure how I'll be able to get that mental image out of my mind but back to the beer ...

The Melbourne brewery also added Talus and Sabro hops to help push Chubby Bunny into the further tropical territory but despite being labelled a Marshmallow IPA, it's not nearly as sweet as you'd be forgiven for assuming. Sure there are clear coconut, pineapple and marshmallow flavours and an underlying piña colada vibe but Chubby Bunny is also quite dry and bitter which counteracts those softer edges. Maybe it's all thanks to the fact the marshmallows were organically farmed?