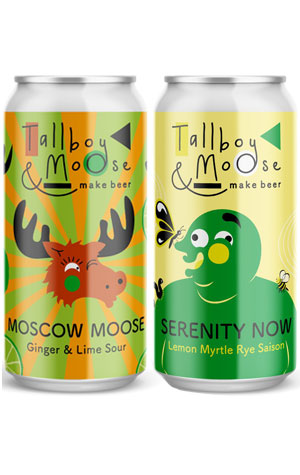 They appear to be having fun over summer at Tallboy & Moose, flitting between suitably warm weather beer styles, raiding the spice cupboard and herb garden, even casting eyes outside the realm of beer. With Moscow Moose, they achieve many of those things in one go, taking the Moscow Mule cocktail as their starting point then reimagining it as a park-friendly mid-strength.

There's plenty of punch upfront of the ginger ale kind (albeit without the prickly heat found in some ginger beers), while the lime comes with a cordial like sweetness that offsets anything much in the way of sourness. It all finishes quickly, like a kick from a mule, in part, one assumes, thanks to the brewers aiming for a decidedly non-cocktail-esque ABV of just 3.5 percent.

From cocktails to the countryside for the lemon myrtle-enhanced saison Serenity Now. Again, this is a beer that's not backward in coming forwards, at least on the nose: all florals and potpourri. The rye ensures there's a little more rounded malt sweetness than in many paler saisons, while there's lick of drying pepper in there too, but it's the lemon myrtle that holds centre stage, swirling its way through proceedings from yay to nay in the company of a couple of citrusy, and in the case of Sorachi Ace, herbaceous hop varieties.