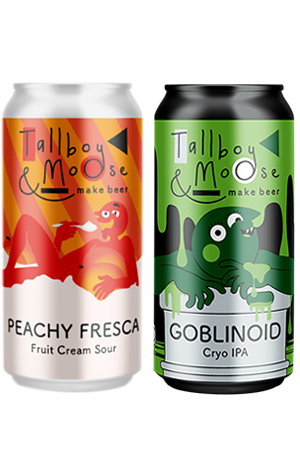 Tallboy & Moose have been revisiting some familiar territory but as the Preston brewpub tends to do, they've provided plenty of twists too. There’s Peach Fresca, part of the brewery’s long-running Fresca Sour series which aims to create harmony between sweet and sour with a kettle sour base being dosed with lactose. Here the beer’s also been refermented on peach puree and while you could assume a beer with puree and milk sugar would only satisfy your sweet tooth, the first sip is really quite bracingly tart. That sour hit is only fleeting though, with the sweeter notes of lactose soon sinking in to the point where you can’t help but feel that combing Peach Fresca with a large scoop of vanilla ice cream would be a marvellous idea.

Goblinoid meanwhile is an ongoing IPA dedicated to the concentrated flavours of Cryo hop. This version uses Cryo CTZ (which is a blend of Columbus, Tomahawk and Zeus), Mosaic, Chinook and Centennial for an IPA that's sticky, rich and filled with overripe fruit notes. It all seems to begin with mango but quickly moves towards a more paw or papaya position before a more sherbety, lolly-like touch of rich orange appears to make an IPA which might use more modern hop products but had the mind drifting towards more classic, chewier times.