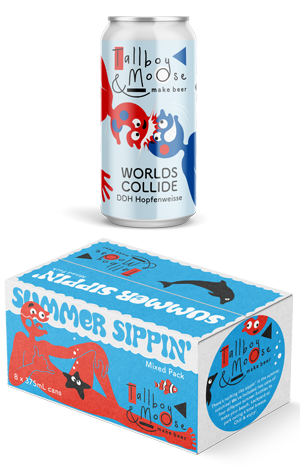 For a brewery that launched with just one core beer and only packaged into litre CANimals you filled at their bar, Tallboy & Moose sure do put out a lot of packaged beers these days. In keeping with most of their peers in these much-changed times, every month seems something colourfully-attired leave the Preston brewpub. And, for midsummer that includes their Summer Sippin' eight-packs.

They're a mix of old and new, with their tangy, cola-inspired Nice Cola and year-round session-friendly Sunray XPA in the former camp. The two newcomers are Beach Mode – a 4 percent ABV cucumber & melon Kölsch – and Park Hangs – a 4.9 percent ABV German pilsner. The first of these brings a reminder that, while cucumber is often thought of as fairly subtle in character, it can actually be surprisingly insidious. That's very much the case here, with the cucumber additions more prominent than the melon, and taking the aroma into more vegetal / herbal / spicy territory than anything sweet and melony. Beach Mode is soft on the palate, with bready malts underpinning proceedings, and is cucumbery as. Also, did I mention the cucumber?

As for Park Hangs, the brewers opted to include more than 40 percent light Munich malt in the grain bill, which has created a beer that sits somewhere between German pils and Märzen. It pours a clear copper with the spicy noble hops that are a key player in the former joined by flavours of bread crust and sweeter malts found more often in the latter.

Sticking in Germany – at least partly – and you have their other January 2022 release: Worlds Collide (5.1%). On the surface – DDH, hazy, full and fruity – the beer sounds like most craft beers on the market these days but that's not so. It's a hoppy hefeweizen, meaning you'll pick up hints of banana and lemon on the nose, a tart, tangy edge amidships before the drying bitterness comes in, and those banana lolly esters return late on to remind you this is a rarity. There's still hop flavours aplenty – pineapple mainly – but in lesser-seen company.

NB Worlds Collide does not feature in the Summer Sippin' packs

We've run them together as they're both available now