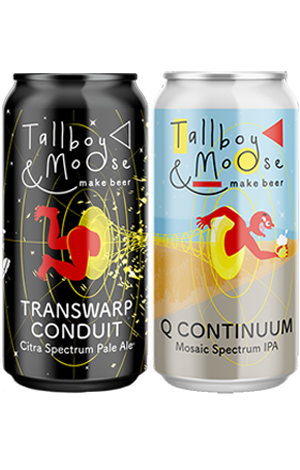 You can always rely on Tallboy and Moose to tinker with beer ingredients but it looks like this time they've gone too far and caused a rip in the fabric of reality. Transwarp Conduit is one side of that wormhole and while its clear golden body makes the beer look like a classic American pale, it’s anything but. Instead, the “modern pale” makes full use of Citra LupoMax hops and Citra Spectrum, with the former of those concentrated hops pellets and the latter a hop liquid designed for dry hopping. It makes for a flavour profile where punchy citrus is key, with that coming out in the shape of grapefruit and mandarin, while a bit of pine and some bitterness comes forward on the finish.

On the other side of the universe, or maybe another reality entirely, is Q Continuum, the modern IPA. Here it’s Mosaic that’s added in both LupoMax and Spectrum form, with that combination taking us to an extra-dimensional display of nectarine, mango, orange and pine.