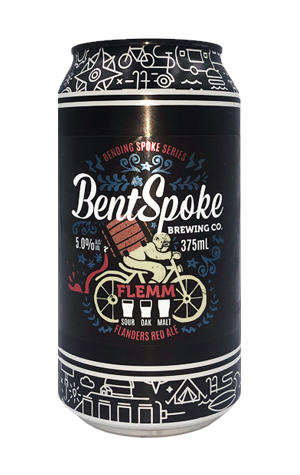 Something new from BentSpoke that's been around a long time in more ways than one (how very BentSpoke, no?). Flemm is their autumnal Bending Spoke limited release, but this take on the Flanders Red style popularised by Rodenbach – inspired by a sampling session at the Belgian brewery many years ago – was first brewed by brewery co-founder Richard Watkins more than a decade and a half ago. Now it becomes one of the first such beers to appear in cans in Australia.

A blend of three beers – one aged in oak for 12 months, another aged, unoaked version, and a younger, fresher brew – it arrives in your glass mahogany in colour, a suitably austere shade for the sort of beer that demands a little respect. If anything, thanks to its deep tan head, it looks a little like cola (talk about respect, ha!) and that's a sensation that returns at times as there's elements of pre-mix sweetness amid the rich, aged malt flavours.

That's very much just part of the picture, however. There's a gentle carbonation that melds with the beer's acidic side (which itself contributes a little sharp sweetness on the nose and a touch, but only a touch, of funk). And melding is really what Flemm is all about as the disparate parts – the dried dark fruits, the oak, the soft yet still borderline bracing acidity, the yeast-derived esters – come together to create a supremely drinkable take on one of the most wonderful beer styles on the planet.