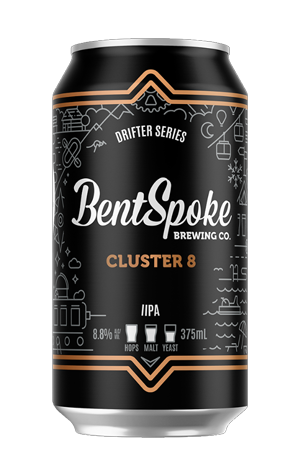 Cluster 8 was one of the first limited release beers BentSpoke put into cans as part of their Drifter Series; we first wrote about it in 2018. It's not one of their beers they evolve year to year either – it has too many dyed-in-the-wool fans for that – but given how many years have passed since then, and how much the IPA landscape has changed over that period, we figured it was ripe for a revisit as it hit taps and fridges in August 2022.

Still rocking the heavy-hitting six-pack of hops that is Galaxy, Citra, Mosaic, Centennial, Simcoe and Amarillo, it remains an unashamedly traditional IIPA. To my mind, it's not far off what Crankshaft would be if everything was turned up a notch or three, or perhaps if that beer was turned into a partial reduction. It's as much about the palate-smothering sticky caramel malts as the dense tropi-citrus hops encased in them like Jurassic Park's mosquito in amber, leaving behind a forest floor like perfume in its wake as it heads towards the thoracic†.

† If anyone would like to suggest some lyrics rhyming Jurassic with thoracic, I'm all ears. Literally – they're massive.

NB If you're reading this in time, we've got four cases of Cluster 8 up for grabs for our beer club members. Head here to enter the giveaway before September 7.