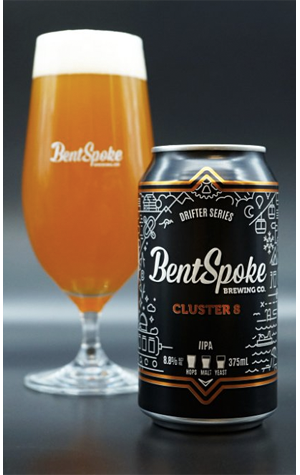 Cluster 8 is a beer that’s long been poured at BentSpoke’s Braddon brewpub and is part of a series of Clusters that, as far as we're aware, has been pushed as high as Cluster 18 so far – with the biggest in the series an IIIIIIPA weighing in at 18 percent ABV. This is where the series started out, however, a double IPA that brings together one serious combination of hops in Galaxy, Citra, Mosaic, Centennial, Simcoe and Amarillo to create a beer that packs both a juicy and tropical punch along with resinous pine.

It’s a little darker than many contemporary beers of the style, pouring a deeply cloudy orange and balancing that hop onslaught with a pronounced malt flavour and associated sweetness. If that sounds right up your alley, the beer left Canberra as the brewery's latest limited release Drifter series can, meaning you don't need to travel to Braddon to try it.