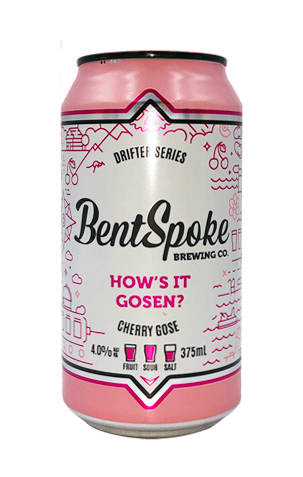 How's it gosen? Pretty good, thanks, BentSpoke, especially now those of us in the Victorian wing of the Crafty team are looking forward to pubs and travel and friends and Christmas and stuff. How's it's gosen with you guys and girls? A little sour 'n' salty, hey? Ah well, you're looking pretty in pink to me.

Summer's coming, which means BentSpoke have returned to a template that worked well for them last time around, albeit with a new spin. The first How's It Gosen? featured passionfruit and mango and was at the cordial end of the session sour spectrum – a fruit-forward crowd-pleaser; here, it's cherry and, while we're a long way from funky, ceramic-stripping kriek territory, it's more noticeably gosey (look, if they can use gosen, we can have gosey).

While not quite as pink as the cans, the beer does have the appearance of a sparkling rosé – a grenache, perhaps, although appearances can be deceptive as there's a distinct saltiness and touch of tang alongside the softly juicy cherries from the off. Swirl it around your mouth and the cherry character really comes alive before that salty-sour underbelly returns.

How's it gosen? It's gone. Got another?

Available from the Braddon brewpub now

Crafty Cabal members have the chance to win a case too