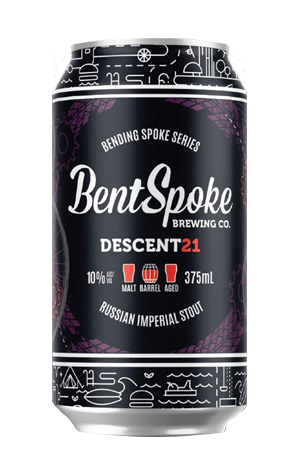 Rich and Tracy from BentSpoke were good enough to come along to The Crafty Pint's IPA Blind Tasting Championship as part of Pint of Origin at Good Beer Week 2021. Their reward, along with all the other guests – brewers and paying attendees – was to spend two weeks in quarantine after it turned out a positive COVID case had been in the pub at the same time. Thankfully, they escaped in time to celebrate the brewery's seventh birthday the day after quarantine ended. And thankfully for those of us not able to attend the party in Braddon, they'd already prepared the birthday beer long in advance.

Descent 21 continues their tradition of releasing a barrel-aged Russian imperial stout to mark the occasion. On the surface, the 2021 version looks like its predecessors: aged in bourbon barrels – check; 10 percent ABV on the nose – check; nigh on black in your glass – check. But it also represents something of a departure; wild yeasts picked up from the barrels take this vintage down a different path – "Nothing like evolution!" is how Rich puts it.

While it's far from a sour stout as such, it presents leaner than in the past – slightly vinous even – and has something of a cabernet sauvignon dark fruit character woven through it too. There's still oak and remnants of the barrels' previous occupant aplenty but they're not as prominent in what's a more streamlined affair awash with roasty, very dark chocolate malts.

And other retailers found here