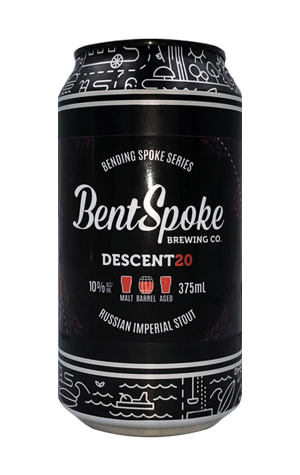 It's always nice when things fall into place. Like travel and overnight restrictions easing in Victoria in time for the long weekend then remembering to get onto booking a campsite straight away to snap up one of the handful of ensuite sites before they're gone. And, better still, having a courier pull up outside the house just as you're hooking up your caravan, having given up hope of your Descent 20 samples arriving in time to be enjoyed – as the BentSpoke team recommends – in the company of a warm fire.

Thus it was that, as temperatures dropped to around 0C and said fire became the focal point of every late afternoon into evening, the Canberra brewery's barrel-aged Russian imperial stout was charged with warming from the inside. The sixth anniversary beer was aged in bourbon barrels for 12 months and they contribute plenty to the aromas rising from the brown head, not to mention the beer's texture and flavour. Also at play are bitter dark chocolate, sticky dark fruits, leather, vanilla, almonds and suggestions of coffee liqueur before the viscous 10 percent ABV drop finishes dry and roasty.

Or, in the rather more succinct words of Mrs Pint: "Thick, chewy and delicious."